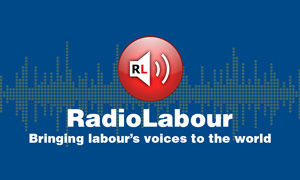 Toronto – May 1, 2020 – UFCW Canada National President Paul Meinema recently spoke with RadioLabour, an internationally web syndicated radio station, to talk about the impacts of the COVID-19 pandemic on UFCW members working in the food retail and meat processing sectors, and to discuss the actions that our union is taking to protect the health, safety, and dignity of workers on the front lines.

As part of the globally broadcasted interview, President Meinema spoke about the enhanced safety measures that UFCW Canada and its Local Unions have successfully advocated for in grocery stores across the country, including floor markings and plexiglass installations to ensure physical distancing and encouraging employers to make hand sanitizer and protective equipment available to staff.

In addition, the UFCW leader talked about the areas where our union is asking food retailers to improve their efforts, such as limiting the number of customers that can enter a store, communicating to customers that they should avoid congregating in groups, and taking a zero tolerance approach when it comes to harassment from customers.

President Meinema also acknowledged the positive developments that have emerged from the COVID-19 crisis, noting that the vast majority of customers have shown respect to food retail workers during this difficult time, and that many Canadians have gained a newfound appreciation for the integral work that grocery store employees perform each and every day. And thanks to the efforts of UFCW Canada and its Local Unions, workers at all Loblaw, Sobeys, and Metro banner stores have gained premium pay for working through the pandemic.

The National President was also asked about the COVID-19 outbreaks at two meat processing plants in Alberta – Cargill in High River and JBS in Brooks – where UFCW Local 401 members work. In response, Meinema said, UFCW has called on both companies to utilize alternative breaks and reduce line speeds to increase physical distancing and give workers much-needed breaks.

“We know what the best safety measures are, and we know that more work needs to be done to better protect workers on the front lines,” Meinema told RadioLabour correspondent Marc Belanger.