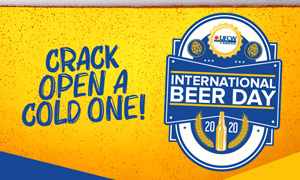 Toronto – August 6, 2020 – Did you know that August 7 is International Beer Day? Across Canada, beer is a popular and beloved beverage for many, as Canadians consumed more than 71 litres of beer per capita last year.

Whether you like lagers, IPAs, stouts, or radlers, or you simply want to try a new beer, International Beer Day is the perfect time to responsibly drink a delicious, Canadian-made beer.

Below is a list of just some of the beers that UFCW Canada members proudly make every day. On International Beer Day, crack open a UFCW-made cold one and say “cheers!” to union-made beer.

To learn more about other amazing food products and beverages produced by UFCW Canada members from coast to coast, visit our Great Canadian Food Products page.