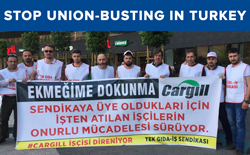 Toronto – August 7, 2020 – Canada’s leading union for food workers, UFCW Canada, has joined in solidarity with unions and labour allies around the world in calling on global food processing giant Cargill to stop preventing workers in Turkey from expressing their democratic right to join a union.

As part of the international action against Cargill, UFCW Canada National President Paul Meinema has joined union leaders from across the globe in sending letters to Cargill’s headquarters demanding the company cease it’s union-busting tactics in Turkey and reinstate fourteen workers who were fired by the company for attempting to unionize a Cargill plant in Bursa-Orhangazi, Turkey.

In addition to contacting Cargill directly to express our union’s opposition to the company’s anti-worker behaviour, UFCW Canada has also sent letters to key Cargill customers in Canada – including Loblaw, Dr. Oetker, and Mondelez – informing them of Cargill’s union-busting tactics in Turkey and asking them to encourage the company to respect the right of its employees to join a union.

As well, now that Turkey is beginning to reopen and recover from the COVID-19 pandemic, Cargill workers and their union, Tekgida İş’, will be holding a press conference on August 10 in front of Cargill’s factory in Bursa-Orhangazi, Turkey to demand that the company stop its crackdown on workers and allow employees at the plant to unionize. You can watch the full press conference on Monday, August 10 by visiting the Cargill Committee’s Facebook page.

UFCW Canada activists and allies can also support Cargill workers in Turkey seeking to join a union by sending a letter to Cargill calling on the global food processing giant to immediately reinstate the fourteen workers who were dismissed and to provide them with full back pay. Tell Cargill that workers in Turkey must be able to freely exercise their right to join a union by sending a message to the company today!