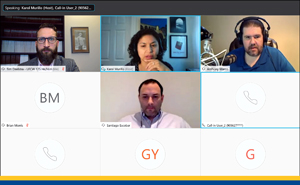 The task force was established to determine key decisions and actions that can be taken quickly to spearhead the COVID-19 recovery in the City of Hamilton and surrounding areas. As part of the task force’s outreach to community stakeholders, UFCW was invited to discuss the concerns of members in the manufacturing, health care, and agricultural sectors, and the challenges facing these workers as the economy recovers from the coronavirus pandemic.

In presenting to the task force, UFCW Locals 175 & 633 called for enhanced workplace sanitation, proper physical distancing, contact tracing and screening protocols, additional personal protective equipment (PPE), new leave protocols for workers who test positive for the virus, and premium pay increases for workers on the front lines, among other measures. The Local Unions also spoke to the ongoing concerns that COVID-19 brings to the workplace, and the need for municipal governments to take the lead in enforcing mask by-laws.

In addition, UFCW Canada’s National Office discussed our union’s work representing migrant farm workers across the province of Ontario and urged the city to join UFCW in calling for federal and provincial reforms that would empower migrant agricultural workers on the job. The union’s recommendations included providing greater access to labour mobility, pathways to permanent residency, meaningful labour protections – including the right to join a union without reprisal – and changes to regulations governing worker accommodations.