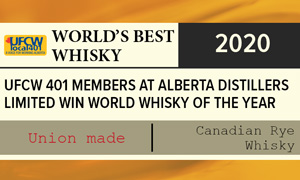 Calgary – September 21, 2020 – UFCW Canada Local 401 members working at Alberta Distillers Limited in Calgary can proudly lay claim to the world's best whisky, now that the Alberta Premium Cask Strength Rye whisky they make has been named World Whisky of the Year by the 2021 Whisky Bible.

Made with 100 per cent Alberta rye grain and water from the Canadian Rockies, Alberta Premium Cask Strength Rye whisky has been dubbed “something to truly worship” by Jim Murray, the internationally renowned whisky expert and reviewer who releases his Whisky Bible – one of the world’s top whisky guides – every year.

The UFCW-made whisky beat out roughly 1,200 other whisky selections for the top title.

This is the second time that a Canadian whisky has received the distinguished honour, as UFCW Local 832 members working at the Crown Royal distillery in Gimli, Manitoba won the World Whisky of the Year designation for their Crown Royal Northern Harvest Rye in 2015.

Members at Alberta Distillers Limited have also won other accolades from the Whisky Bible in the past, as Alberta Premium whisky was named Canadian Whisky of the Year in the 2006 through 2009 Whisky Bibles.

“The best in the world tastes even better knowing it was made by UFCW 401 members in Calgary,” UFCW Local 401 said in a statement on Facebook. “Congrats to all members at Alberta Distillers Limited on this amazing achievement!”

To learn more about other amazing beverages, snacks, and food produced by UFCW Canada members from coast to coast, visit our Great Canadian Food Products page.