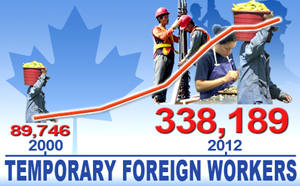 Ottawa – March 6, 2013 – UFCW Canada recently participated in an "invitation-only" roundtable regarding the federal government's Temporary Foreign Worker Program (TFWP).  The meeting was held in Ottawa and was chaired by Jason Kenney, Minister of Citizenship, Immigration and Multiculturalism, and Diane Finley, Minister of Human Resources and Skills Development.

The federal government is conducting ongoing consultations that it says are aimed at improving the TFWP following complaints that employers are using the program to exploit migrant workers who lack sufficient employment protections, benefits, and compensation.

"While our grievances with the TFWP remain intact, and nothing was said to indicate that meaningful change is on the horizon, the dialogue with Ministers Kenney and Finley was an important first step in reforming a program that is unwanted by many migrants and is economically unsustainable," says Naveen Mehta, General Counsel for UFCW Canada.

"Constructive dialogue and consultation with all levels of government has been a primary tenant of our long-term strategy to achieve legislative change and eliminate the abuse that is inherent within the TFWP as it is currently structured," adds Brother Mehta, who attended the consultation on behalf of the union.

Prior to participating in the roundtable, UFCW Canada encouraged the federal government to adopt the recommendations of the Fall 2012 Metcalf Foundation report entitled "Made in Canada: How the Law Constructs Migrant Workers' Insecurity." The report found that the TFWP lacks the supports, programming, and services needed to operate efficiently and effectively and recommended that adequate resources be made available to the program. It also called on the federal government to provide more migrant workers with a path to permanent residency and opportunities to improve their skills while working in Canada.