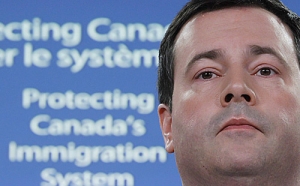 Ottawa – April 29, 2013 – The union that represents thousands of temporary foreign workers is frustrated – but not surprised – at the glaring lack of substance in the federal government’s announcement today about “fixing” the shameful state of Canada’s temporary labour and immigration system.

“Today’s announcement by Ministers Jason Kenney and Diane Finley does nothing to improve the situation for thousands of people employed in the food sector, and it’s far too little, and far too late for people who work in other industries, like banking, where Canadians recently witnessed the shameful RBC scandal,” says Wayne Hanley, the national president of the United Food and Commercial Workers Union (UFCW Canada), which represents tens of thousands for temporary foreign workers in a number of key Canadian industries, including agriculture, meat processing, hospitality, and the fisheries.

“Adding a training requirement to the program is all fine and good, but that will not stop employers from finding ways to abuse a system that was designed to be abused, and it does nothing to protect workers in other industries – like agriculture and meat-packing – where employers have become chronically dependent on migrant labour,” adds Hanley. “The key fact this government refuses to accept is that Canadians can't survive in the low-wage economy that the Tories have prescribed for working families,” says the UFCW Canada leader.

“If the Harper government was sincerely concerned about this issue, and fully committed to fixing this problem, it would introduce reforms that focus on robust immigration instead of the short-term special interests of big business. It would change this broken system to allow for real opportunity to transition from temporary status to permanent residency,” adds Hanley. “That is precisely the kind of work that UFCW Canada is doing through its groundbreaking collective agreements. We are proving that Canada’s largest employers can and do make record profits, while still offering life-changing paths to citizenship.”

UFCW Canada is the country's largest private-sector union, representing more than a quarter of a million workers from coast to coast, including thousands of temporary foreign workers in key industries, including agriculture, meat processing, hospitality and the fisheries.