By the Numbers: Global Unemployment Trends

Ottawa – May 6, 2013 – According to a recent report by the International Labour Organization (ILO), worldwide unemployment will increase by 5.1 million this year – for a total of 202 million people around the globe who are unemployed.

In developed economies in Europe youth unemployment is almost as high as 50 per cent in certain countries.

Youth unemployment is expected to rise in emerging economies in Eastern Europe, East and South-East Asia and Middle East.

Almost 39 million people have dropped out of the labour market.

About 4 million of the world’s newly unemployed came from developing countries in East Asia, South Asia, and Sub-Saharan Africa.

In Latin America, the unemployment was at 6.6 per cent in 2012, but showing a higher rate of recovery from the economic crisis.

In the Middle East the unemployment is on the rise, with vast differences by regions, as oil-producing countries tend to have low unemployment.

In Sub-Saharan Africa, 77 per cent of workers find themselves in vulnerable employment.

Wage growth fell in developed countries but steadily increased in the emerging economies.

Over the last ten years, wages have grown at a slower pace than labour productivity.

The total number of the world’s unemployed is expected to rise to more than 210 million over the next five years. 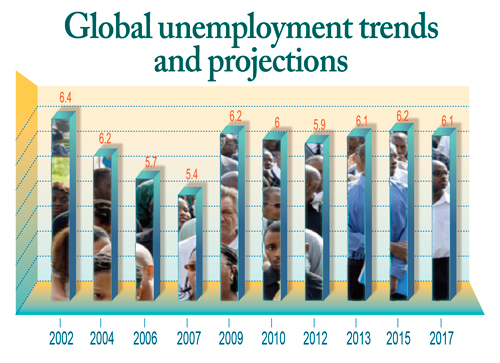