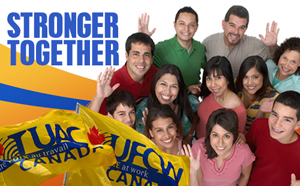 Toronto – May 20, 2013 – The National Council of Canada’s leading union, UFCW Canada, recently met in Toronto to review the achievements of national organizing and outreach programs, and to discuss the crucial importance of uniting UFCW Canada’s strength with other progressive organizations in stopping Ultra-Conservative politicians from passing anti-worker legislation.

To protect UFCW Canada members and all working families from the harmful effects of anti-worker laws, the National Council unanimously voted at the meeting to support a historic “Together FAIRNESS WORKS” campaign. The new campaign will involve the entire Canadian labour movement, working in conjunction with community allies, and progressive partners around the world, to stop the harmful agenda of Stephen Harper in Ottawa, and Ultra-Conservatives at the provincial level, like Tim Hudak in Ontario, and Brad Wall in Saskatchewan.

“As Canada’s leading voice for workers, UFCW Canada is fully committed to stopping the anti-worker agenda of Ultra-Conservative politicians, whose discredited ideas will only trigger a race to the bottom and hurt the standard of living for UFCW Canada members and their communities,” says UFCW Canada National President Wayne Hanley.

“Anti-worker laws are not in keeping with the fundamental value of fairness that many Canadians consider a central part of who we are as a country, and UFCW Canada will be working with our allies and community partners to prevent any attempt by the Ultra-Conservatives to trigger a race to the bottom that involves Canadian labour laws being traded for the worst kind of legislation that we currently see in economically depressed American states like Alabama.”