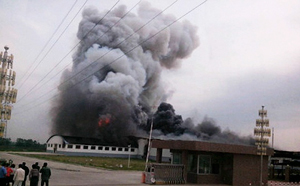 Toronto - June 3, 2013 - The deaths of at least 119 workers on Monday at a plant in Jilin, China, "is a tragic reminder that the health and safety of workers must be the first priority in any workplace," says Wayne Hanley, the National President of UFCW Canada (United Food and Commercial Workers union). UFCW Canada is Canada's largest, private-sector union — and the union that represents workers in the food retailing, warehousing and food manufacturing sectors in Canada, including the red meat and poultry processing industries.

"On behalf of UFCW Canada members across the country, we extend our condolences to the families of the Jilin workers who have lost loved ones in this tragedy," said the UFCW Canada leader. "Our thoughts are with them, as well as those UFCW Canada members who may have friends of relatives who were injured or killed in Monday's fire."

The cause of the fire at the Jilin Baoyuanfeng Poultry facility, about 800 kilometres north of Beijing, is still under investigation.

"Almost all workplace deaths and injuries are preventable. Vigorous health and safety regulations and training are key to prevention," says Brother Hanley. "This also includes safety as a primary priority when designing a facility. We hope that the Jilin investigation determines just what the factors were that led to the fire, in order to prevent such a tragedy from ever happening again."