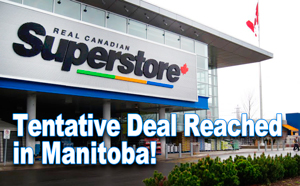 Winnipeg – September 27, 2013 – The UFCW Local 832 bargaining committee representing more than 3,000 Superstore and Extra Foods members in Manitoba, shook hands on a on a tentative deal with Loblaw officials yesterday at 4 p.m.

With the union’s leverage of a 98.3 percent strike vote, both sides worked around-the-clock on a new deal that will avoid a province wide strike. Details of the new deal will be released to the members at seven locations across Manitoba on October 20, 2013.

UFCW Local 832 President Jeff Traeger and the bargaining committee believe the deal will be remembered for years to come as a defining moment for the local. “This deal could not have been reached without a few things,” stated President Traeger. “A strong strike vote in early September by the membership, a strong bargaining committee that took the company as far as they could go in a new deal and Manitoba’s progressive labour laws. The current government has fair and balanced legislative protection for workers in this province so a company like Loblaw cannot push people on a picket line for an indefinite amount of time. With the help of those laws, our collective agreement will assist locals in Alberta and Saskatchewan to get a deal.”