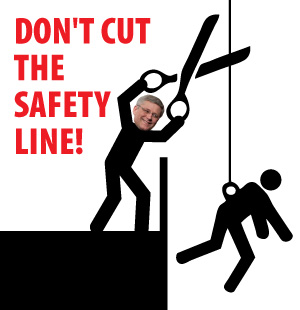 Ottawa – November 6, 2013 – The Harper government has now proposed to substantially weaken the health and safety protections for workers employed in federally regulated industries and workplaces. The proposals are a matter of life and death and would leave federal workers faced with employer reprisal for refusing to do dangerous work.

If the proposed changes go through —

This attack on the health of safety of federal workers is buried in Bill C-4, a Harper Conservative budget implementation bill that was introduced into the House on October 22. Tacked on to the bill are a series of amendments that would gut the Canada Labour Code's health and safety protections for workers under federal jurisdiction.

A million workers would be put in danger including railway, airline, postal, pipeline, shipping, communications, and other workers under the Canada Labour Code — a million lives put at risk to protect the profits and production quotas of the corporate elite.