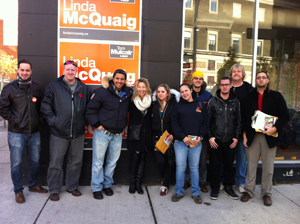 Toronto – November 14, 2013 – UFCW Canada members and political action course graduates recently put their skills to work in Toronto by volunteering for pro-worker candidate Linda McQuaig in the city’s by-election. McQuaig is an award-winning author and journalist who is especially well-known for her work about the rapidly growing gap between the rich and the rest of us, and the essential role of organized labour in building more fairness for our communities and future.

Throughout the union’s weekend canvass, UFCW Canada activist volunteers rallied support in several key polls by having doorstop conversations with numerous voters in Toronto Centre about Linda and the importance of electing governments that represent the community’s interest.

Working closely with Local Unions, the UFCW Canada political action department has trained hundreds of members across the country to be the defining force in election campaigns at every level of government, including the four current federal by-elections in Toronto Centre, Bourassa, Brandon Souris and Provencher. In each by-election campaign, UFCW Canada activists are volunteering their time to help elect more NDP MPs – who will put the interests of working families first – and to build momentum toward the election Tom Mulcair and a NDP government in 2015.