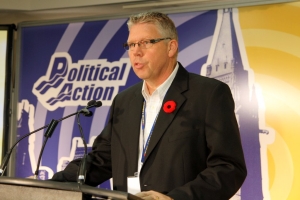 Brother Meinema was elected to lead the National Council at the Executive Board’s recent meeting on November 7, after former-National Council President Wayne Hanley announced his decision to step aside, and to serve the union in a different role, as the newly elected president of UFCW Canada Local 206.

President Meinema’s dedication to UFCW Canada spans four decades, going back to the early 1980s when he first volunteered to serve the membership as a shop steward while working on the kill floor at the Fletcher’s meat processing plant in Red Deer, Alberta. Since then, Brother Meinema has led numerous UFCW actions, organizing campaigns and collective bargaining efforts as a Local Union staff representative, international representative, Local Union President, and Executive Assistant to the UFCW Canada National President.

Throughout his career, President Meinema has also served the membership in a number of administrative roles including vice-president of the UFCW Canada National Council; trustee of the UFCW Saskatchewan Dental Plan; member of the Canadian Board of Directors of the International Foundation of Benefits; and trustee of various other benefit and pension plans.

“Paul’s commitment to the UFCW is well proven and unparalleled,” says Brother Hanley. “The guiding principles and aspirations of our great union are at President Meinema’s core as a person and activist, and now as leader of the UFCW Canada National Council.”