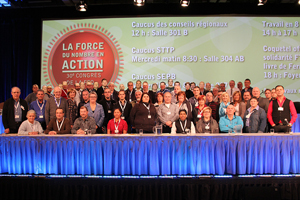 Quebec City – December 2, 2013 – The 30th FTQ (Quebec Federation of Labour) Convention opened on Monday, November 25, 2013 with the theme, “Action through strength in numbers". Delegates gathered at the Quebec City Convention Centre for the five-day convention to discuss the labour federation’s strategic agenda for the next three years.

In order to be well-prepared to address the major collective issues to be debated, the 60 members of the UFCW Quebec delegation held a caucus meeting prior to the opening of this key convention.

Issues such as management changes for UFCW Quebec in particular were discussed at the meeting. In that regard, we are pleased to announce that members of the FTQ General Council approved the nomination of Anouk Collet to the position of FTQ Vice-President.

Also, the new President of the Quebec Provincial Council and President of UFCW Canada Local 500, Antonio Filato, took the opportunity to recognize Louis Bolduc’s work, commitment and great contribution to the labour movement. Brother Bolduc announced his retirement a few weeks ago after 32 years of dedicated service to our great union.

In addition to the numerous discussions and debates on the future of the labour movement and ways to thwart the ultra-Conservative attacks on worker's rights, the 1,500 delegates attending the convention had gathered to elect a new president to head the FTQ, following Michel Arsenault’s announcement that he would not be seeking another term. Delegates at the caucus meeting heard presentations from Daniel Boyer and Serge Cadieux, as well as from Claude Généreux who decided to run for the position of General Secretary. Daniel Boyer was later elected by acclamation as FTQ President by the convention delegates.