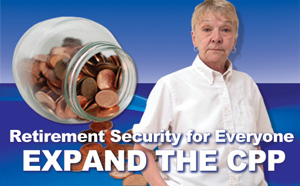 Toronto – February 3, 2014 – The pressure on the Harper government to expand Canada Pension Plan (CPP) benefits continues to build – thanks to the strong voice of UFCW Canada, labour allies, and the overwhelming majority of workers across the country calling for an enhanced CPP.

To add to the call, UFCW Canada and allies have just launched a new petition. The petition calls on the Harper government and all members of the House of Commons to support the expansion of CCP benefits – and to work with the provinces to make it happen. The goal is to collect a million signatures. Copies of the petition are available from the UFCW Canada National Office, as well as UFCW Canada Local Unions.

"The vast majority of people in Canada, as well as provincial premiers, want an expanded CPP. That is the message we're sending," says UFCW Canada National President Paul Meinema. "The time to delay in expanding the CPP is over. It is time for all MPs and the Harper government to listen to the people and improve retirement security for all workers in Canada by enhancing the CPP benefits."

UFCW Canada members, activists and family members are also encouraged to make their voices heard by sending a message to their Member of Parliament to expand the CPP.