Tell Cargill to stop its anti-worker attacks in Egypt 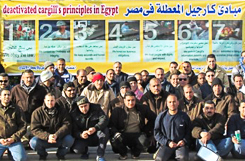 Toronto – March 13, 2014 – As the union that represents over 4,500 members working at Cargill facilities across the country, UFCW Canada is outraged to learn about the aggressive, anti-worker practices that are being used by Cargill management in Egypt.

According to the International Union of Food, Agricultural, Hotel, Restaurant, Catering, Tobacco, and Allied Workers' Association (IUF), Cargill workers held a peaceful sit-in in December 2013 to protest against arbitrary punishments and a deteriorating work environment at their factory in Egypt, to which the company responded by shutting the factory and putting the workers on extended leave.

Cargill management then re-opened the factory in January 2014, but has prevented the workers from entering the facility. Instead, the company has hired scab labour to replace its employees.

UFCW Canada members, activists and allies are encouraged to add their name to an IUF letter voicing outrage at the termination of peaceful, protesting Cargill employees in Egypt. The letter calls on Cargill management to ensure that the worker dismissals are revoked so that the employees can return to their jobs, and asks Cargill to end its anti-worker practices so that constructive union-management relations can be restored at the factory in Egypt. You can sign the letter here.