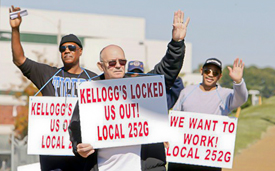 Toronto – March 25, 2014 – Kellogg Company, the $14 billion multinational food corporation, is devastating the lives of workers and their communities around the world. In December 2013, Kellogg announced it would be closing a highly successful plant in London, Ontario resulting in the loss of more than 500 jobs. Many of the affected families had worked at the plant for three generations. Unionized Kellogg factories have also been closed in Australia. Now the company is trying to do the same to workers in Memphis, Tennessee.

Kellogg workers in Memphis have been locked out since October 22, 2013. The union is rejecting the company’s demand to impose a contract that would classify all new hires as casual, with no guaranteed hours and substantially lower pay and benefits. Plant closures, poverty wages and the loss of job security is what Kellogg calls “The New Workforce of the Future”.

While Kellogg CEO John Bryant receives a pay raise of $8 million, the company treats long-time workers around the world – the people who make the company so successful – as completely disposable. Under the guise of corporate restructuring, executives and shareholders are putting an end to a tradition of providing good jobs first started by founder W.K. Kellogg.

“We cannot let the greed of Kellogg executives continue to destroy the lives of workers and our communities. As Canada’s union for food workers, we can make a difference by taking international action to protect labour rights everywhere,” says Paul Meinema, UFCW Canada National President. UFCW Canada is asking all our members, activists and supporters to take action immediately to stand in solidarity with the workers in Memphis. Send a message to Kellogg CEO John Bryant right now and tell him that the company's refusal to treat workers fairly is unacceptable.

Also hear first-hand through videos from workers in London and Memphis, about their fight against Kellogg's shameless attack on them, their families, and communities.