UFCW Canada joins IUF, unions from around the world, at Heinz summit in Pittsburgh 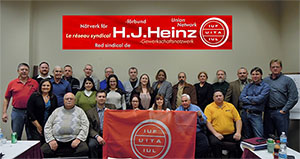 Pittsburgh, PA – March 27, 2014 – UFCW Canada recently joined unions from the world at a summit in Pittsburgh focused on calling for sustainable employment at Heinz, and its supply-firms around the globe.

Organized by UFCW International and the IUF, the meeting included participants from Canada, the United Kingdom, Belgium, Netherlands, Russian Federation, the United States, and Ukraine, who shared experiences with Heinz and discussed new ways to develop coordination and build solidarity networks to counter the restructuring measures launched by the company’s new ownership: 3G Capital and Berkshire Hathaway.

Unions from New Zealand also joined the meeting remotely, and provided a report about their international efforts with fellow Heinz workers Australia.

The meeting concluded that the company – under its new ownership – is bent on not only reducing its total number of factories, but also squeezing workers by combining jobs and increasing workloads.

The meeting studied the current state of the company, its role in the global food industry and supply chain, and raised serious concerns about the company’s decision to close a number of profitable plants in North America and Europe.

The IUF secretariat was mandated to continue research work, and to organize on-line conferences on a regular basis.