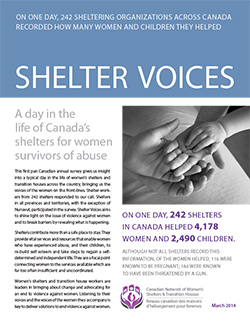 The survey shows that on one day, 242 shelters in Canada helped 4,178 women and 2,490 children. The survey also shows that 116 women were pregnant and 184 had been threatened by a gun. “Canada can and must do more to end violence against women” said Lise Martin, the Network’s Executive Director.

“This survey brings to us the voices of women survivors and their children and the voices of front-line shelter workers who are incredible change agents within their communities. Concern over inability to effectively address increasingly complex issues faced by clients and the feeling of not being able to affect the systematic causes of the issues facing clients were the top two most critical issues for shelter workers” said Martin.

The Canadian Network of Women's Shelters & Transition Houses is a coalition of 12 provincial and territorial shelter networks representing over 350 shelters across Canada. It works as a unified voice to collaborate, educate, and innovate for systemic change that ends violence against women, making Canada a model for safety in the world. UFCW Canada is proud to support this organization and the important work they do, among which involves the development of a National Action Plan on Violence Against Women.