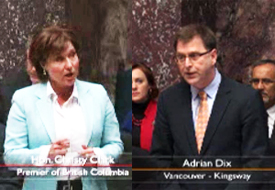 Victoria, B.C. – March 31, 2014 – The verdict by the B.C. Labour Relations Board (BCLRB) that Mexico had blacklisted Mexican migrant workers in British Columbia suspected of being union supportersrocked the B.C. legislature last week, as the opposition demanded action from Premier Christy Clarke to tell Mexico to stop the blacklisting.

"The B.C. Labour Relations Board ruled that the Mexican government had blacklisted a Mexican seasonal worker from returning to Canada because of suspected union sympathies," explained NDP Leader of the Opposition Adrian Dix during Question Period on March 26.

"I'm asking the Premier, given in this case we're talking about the blacklisting of people who are asking for their basic employment rights…. That's what we're talking about. Will the Premier, given the decision and the ruling of B.C. Labour Relations Board, take action to ensure that workers in that situation get the same rights as every other worker in British Columbia?....Will she take action? Will she join with me, for example, in sending a joint letter to the Mexican consulate saying that this practice is completely unacceptable to her?"

"We absolutely on this side of the House believe that every worker in British Columbia has the right to be protected," answered the premier. "Every worker in British Columbia deserves to know that the law is there to protect them. We believe in that. We stand for that, and those rules exist across the board to protect people no matter where they come from."

As for sending any letter to the Mexico government, the premier declined to commit, while scrambling to respond without specifics. "We have responsibilities to fulfill. We intend to fulfill them. We want to ensure that every worker in our province, whether they are temporary or whether they are permanent, has their rights respected as they should be."