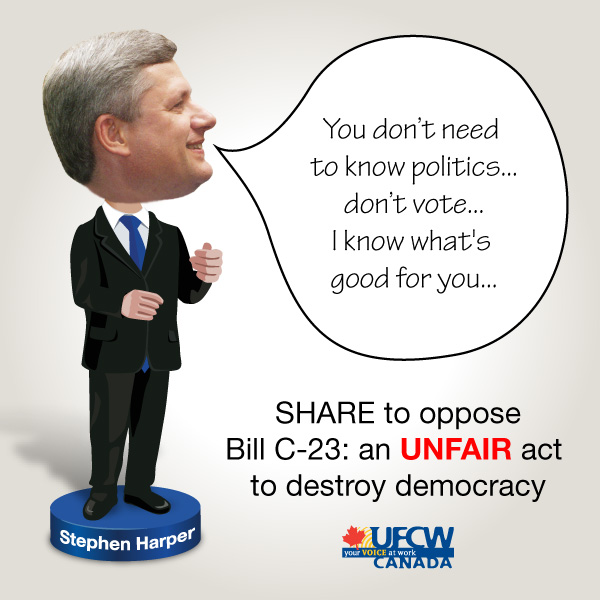 Toronto – April 16, 2014 – Opposition to the Harper government’s Bill C-23, (the deceitfully named "Fair Elections Act") is growing across Canada – thanks in part to the ongoing efforts of UFCW Canada activism, lobbying, and social media campaigns. UFCW Canada blogs, Facebook infographics, and commentaries have engaged literally tens of thousands across the land, helping to build solidarity against the ultra-Conservatives' blatant plans to dismantle democracy.

Now, Canada's leading union has also added its voice as joint-signatory of an open letter to Members of Parliament to scrap what is clearly the Unfair Elections Act, and its agenda to stack the deck in favour of the Harper Conservatives in the next federal election. Other signatories include leading Canadian authors, artists, musicians, scientists, as well as community, labour, and social justice allies.

The Unfair Elections Act aims to eliminate the practice of “vouching” – a system which ensures voters who lack official identification are not excluded from the democratic process. Approximately 120,000 Canadians voted by vouching in the last election. Outlawing this option would make it more difficult for aboriginal peoples, students and low-income voters in particular to cast their ballots.

On top of this, the bill seeks to raise spending limits and increase election campaign donation limits, while simultaneously banning Elections Canada from launching citizen outreach and educational campaigns. Last year, the Conservatives had as many large donors – those who give $200 or more – as the Liberals and New Democrats combined.

Clearly, Bill C-23 is an attempt to create a system of vote buying and voter suppression. UFCW Canada and the NDP Official Opposition are now joined by a diverse, widespread and growing list of Canadians who are committed to protecting democracy.

“Bill C-23 is the most blatant attempt yet by Stephen Harper to silence the voices of concerned citizens and ordinary Canadians,” says Paul Meinema, UFCW Canada National President, “As Canada’s leading union, we stand united with people from every walk of life to protect the democracy we all cherish.”