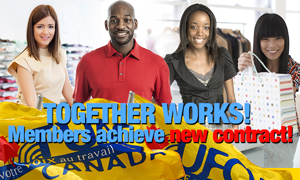 Brampton, Ont. – ­­July 18, 2014 – Members of Canada’s leading union for retail workers have ratified their first collective agreement at the Sirens retail store in Brampton. On July 11, Local 175 members at the first unionized Sirens store in Canada voted unanimously in favour of the contract.

The collective agreement at Sirens includes cutting edge improvements that are unique to Canada’s retail fashion sector. In addition to just cause protection and grievance procedure language, the contract includes a wage progression scale that recognizes seniority. Furthermore, the Union Negotiating Committee secured scheduling language where part-time workers must be offered their full complement of 30 hours per week on the basis of seniority.

The company will pay for holidays, sick leave and breaks, and ensure that a microwave, employee lockers and a table and chairs are provided in the lunch room. There is an average wage increase of 2.4 percent for each year of the three year contract, which will improve wages by 80 cents per hour during the next 30 months. While workers in other sectors might take these kinds of benefits for granted, retail workers will understand the importance of securing such basic provisions.

The Sirens workers decided to join the union when they heard about Local 175’s reputation for accomplishing robust collective agreements in the retail sector. Following a courageous and determined organizing campaign, the workers at the Bramalea City Centre won their certification vote by a landslide.

“Congratulations to our members at Sirens for achieving such a strong first contract,” says Shawn Haggerty, UFCW Canada Local 175 President, “This agreement is an example to all retail workers across Canada that working conditions can be substantially improved when they join the union.”

UFCW Canada is the nation’s best union for private sector workers, representing more than a quarter million workers from coast to coast. As the number one choice for retail workers, UFCW Canada represents employees at Loblaw, Metro, Sobeys, H&M, Rona and Staples.