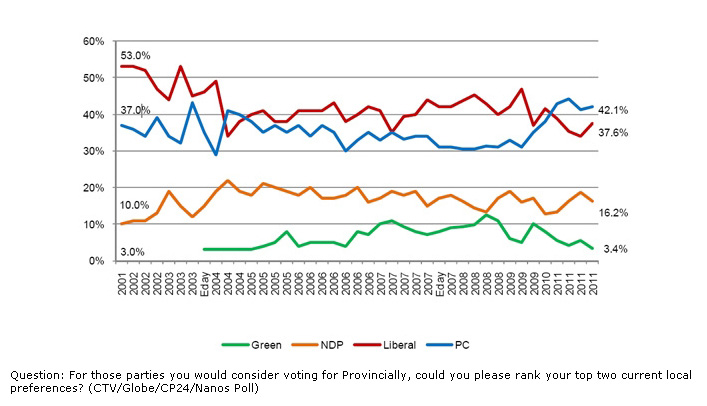 With less than eight weeks to go before voters in Ontario head to the polls, the race between the Progressive Conservatives and the Liberals has tightened, with the Tories five points ahead among decided voters, a new poll suggests.

The Nanos Research poll – conducted between August 10 and August 13 for CTV – found the Liberals are on an upswing, closing the gap slightly with the Tories.

According to the poll, support sits at:

The poll also found that 17% of voters remain undecided.

The Liberals made the biggest gains, surging nearly four points since May, while the Conservatives remained statistically unchanged.

Nanos Research President Nik Nanos said the results indicate that "we have the race tightening up."

Nanos attributed the recent bump in support for the Liberals to attack ads aimed at Tory Leader Tim Hudak, who remains an unknown entity to many Ontario voters.

When comparing the poll results to voter share from the last election, the Progressive Conservatives are up more than 10 points, from 31.6 per cent support. The Liberals are down about five points, from 42.3 per cent support. For the NDP, their poll numbers are consistent with the support they received in the 2007 election.

The Ontario election will take place on October 6.

To find out more about how UFCW Canada activists can make a political difference visit www.ufcw.ca/politicalaction, and to get the latest news on the Ontario election subscribe to the union’s weekly political action bulletin Politics NOW!.