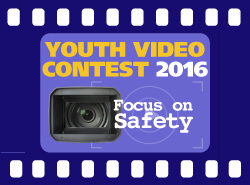 Toronto – January 8, 2016 – UFCW Canada is calling on young activists to get involved with an innovative video contest that aims to educate young Canadians about workplace safety, employee rights, and fairness on the job. The "It's Your Job: Prevention Starts Here" video contest is seeking original youth-made videos on workplace safety in order to prevent injuries and illnesses at work.

The contest is open to all secondary school students across the country. Winners will be selected from each province and territory and will advance to a national competition where they will compete for a cash prize and the chance to attend the North American Occupational Safety and Health (NAOSH) Week Launch ceremony in May 2016.

Every year, hundreds of youth are injured or killed at work, many of them within days of starting a new job. In Ontario alone, 30 young workers between the ages of 15 to 24 died in work-related incidents between 2009 and 2013. During the same period, 30,000 young workers suffered injuries that resulted in lost time at work, according to WSIB statistics.

To enter this important contest, simply visit the contest page for your province or territory by clicking on the appropriate link below: