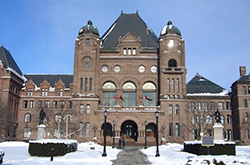 Toronto – February 19, 2016 – UFCW Canada, the union at the forefront of diversity and inclusion, welcomes Ontario’s initiative to establish a new Anti-Racism Directorate under the direction of Michael Coteau, Minister Responsible for Anti-Racism and Minister of Tourism, Culture and Sport.

“We commend Premier Wynne and Minister Coteau on the establishment of this much needed directorate,” says UFCW Canada National President Paul Meinema. “As we know all too well, racism rears its ugly head sometimes in blatant forms, but it is also prevalent in very nuanced and subtle ways. As the labour movement has a history of fighting racism, we want to ensure that in battling it, the voice of racialized workers is front and centre,” says the UFCW Canada leader.

More than 115,000 UFCW Canada members live and work in Ontario. “The new Ontario Anti-Racism Directorate should not just be a rules-oriented approach to anti-racism, but should work closely with Ontarians to build a community that embraces and celebrates difference,” says Brother Meinema, the leader of Canada’s only union with a diversity and inclusion department and national Strategic Diversity and Inclusion Initiative training program.

“The establishment of government bodies such as the Anti-Racism Directorate supports the comprehensive work of UFCW Canada around anti-racism, diversity and inclusion,” says Naveen Mehta, UFCW Canada’s human rights and diversity director. “UFCW Canada looks forward to sharing its experience and commitment and working with the new directorate to combat racism and ensure equity for all Ontario workers and families.”