Closing the Gap: Women make less than men in retirement too 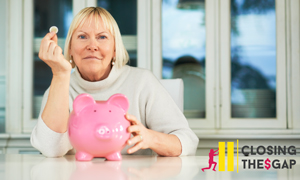 For many women in Canada, retirement is a financial struggle. In fact, senior women are twice as likely to live in poverty as men of the same age. Women are also more reliant on Old Age Security (OAS) and Guaranteed Income Supplement (GIS). According to statistics from 2011, 30% of the average senior woman's total income was from OAS and GIS, compared to only 18% for the average senior man in Canada.

Women who make investments in annuities are also victims of the gender wage gap. An annuity is a contract between a customer and an insurance company, in which the customer makes a lump sum payment or a series of payments and in return receives regular payments. Some people use annuities to receive a steady stream of income during retirement.

However, according to new study, women who make these investments must pay a higher annuity purchase to receive the same annuity income of a man of the same age. For example, if a 65-year-old woman pays $100,000 to a major insurance company, she will in return receive about $474 monthly, while a man of the same age spending the same amount will receive $519.

The Canada Pension Plan (CPP) does not distinguish between genders. Women and men of similar ages, and with similar contribution records receive the same monthly pension. Registered workplace pensions, some of which are achieved by a union contract, are also not allowed to discriminate between gender, meaning that women and men get paid equally for equal contributions.

When women already earn less over a lifetime, they already less likely to retire with financial security. The most effective way to combat gender wage inequality is through a union contract. UFCW Canada is proud to be a part of the fight for income equality. As Canada's most progressive private-sector union, UFCW Canada has launched the Closing the Gap campaign in order to highlight the union advantage when it comes to the fight on gender wage inequality. To learn more about UFCW Canada's advocacy efforts for women, visit ufcw.ca/women.