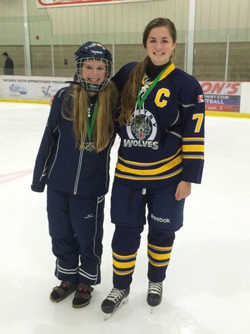 Whitby, Ont. – January 4, 2017 – Trevor McQuigge, a UFCW Canada Local 12R24 Vice-President and member, is overjoyed that his daughter, Brooke, has recently been named to Team Canada at the 2017 IIHF U-18 Women's World Hockey Championships.

Brother McQuigge is a longstanding Local 12R24 member who works as a truck driver for The Beer Store in Whitby, Ontario. He is extremely proud of his daughter’s achievements. At 16, Brooke has already been offered a scholarship at a top Ivy League school in the United States.

Brooke McQuigge, who currently plays with the Whitby Wolves in the Provincial Women's Hockey League (PWHL), will join 22 other top female players at the IIHF Under 18 Women's World Hockey Championships from January 7 - 15 in the Czech Republic.

Team Canada opens up the tournament against Sweden on January 7. They will then take on Russia on January 8, before facing the United States on January 10. Both the gold medal and bronze medal games take place on January 14.