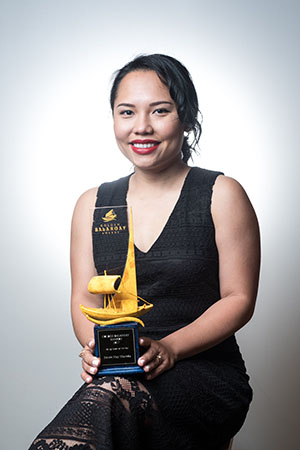 Toronto – September 14, 2017 – UFCW Canada National Representative Zenee May Maceda was recently presented with the Young Leader of the Year award at the inaugural Golden Balangay Awards, held on September 9 at the BMO Institute for Learning in Toronto.

Organized by a number of Filipino community groups, businesses, and non-profit organizations, the awards show was established to celebrate Filipino Canadians who have made a positive impact in their community or field of work. It recognized Sister Maceda as the 2017 Young Leader of the Year for her outstanding efforts in promoting social justice and workers’ rights as a labour activist with UFCW, and for her work in engaging young union members as the coordinator of UFCW Canada’s Young-Workers Internship Program (YIP).

“I am incredibly honoured to be a recipient of the Golden Balangay Young Leader of the Year award,” says Sister Maceda. “This award was given to me in recognition of the work that I do as a young labour advocate, so I know it isn't only for me. It is for all my friends, family, and colleagues who have committed themselves to fighting for working people in Canada and in the Philippines,” she adds.

To learn more about the Golden Balangay Awards, click here.