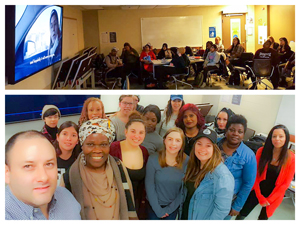 Toronto – April 14, 2018 – Canada’s leading union for young workers had a strong presence at this year’s George Brown College Labour Fair in Toronto, where UFCW Canada activists conducted workshops on the plight of migrant workers in Canada and engaged young workers on how they can make a difference in their workplaces.

During the week-long event, UFCW Canada activists led workshops aimed at educating students and young workers on how they can achieve fairness at work, and also informed fair attendees about the injustices that migrant farm workers face while working in Ontario.

In addition, students were treated to a screening of Cecilia, a short documentary film that explores a migrant worker’s experience labouring in Ontario, and her fight to win respect and dignity in the workplace.

The George Brown College Labour Fair is one of the school’s largest annual events, bringing together over 3,000 students from three different campuses with labour activists and unions from across the country. To learn more about the fair, click here.