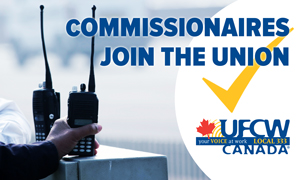 Ottawa – September 4, 2019 – Security guards working for Commissionaires Ottawa at the Canada Revenue Agency (CRA) headquarters in the nation’s capital are the newest members of UFCW Local 333 after recently voting to join the union.

The security guards voted unanimously in favour of joining UFCW in order to gain better wages, benefits, and job security. They join many other Commissionaires employees in Ottawa and Hamilton who have chosen UFCW 333 as their voice at work.

“Congratulations and welcome to Commissionaires guards at the CRA headquarters in Ottawa,” says Richard McNaughton, President of UFCW Local 333. “Our union looks forward to helping you build a better life as we work to negotiate a first collective agreement,” he adds.