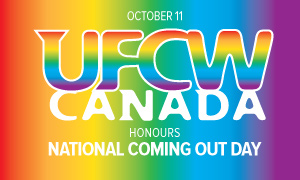 Toronto – October 9, 2019 – National Coming Out Day originated in 1988 and was first observed on the anniversary of the National March on Washington for Lesbian and Gay Rights. The day raises awareness of LGBTQI2S identities and the deeply personal nature of coming out if you are part of the LGBTQI2S community. It also calls for societal inclusion of all gender diverse persons. Since its first observance over thirty years ago, National Coming Out Day has become a widely celebrated event among the LGBTQ+ community and allies and is supported by the Human Rights Campaign (HRC), the Egale Canada Human Rights Trust, and the Canadian Centre for Gender and Sexual Diversities.

Coming out is often not a one-time occurrence, nor is the impact of coming out always positive. According to HRC, one in ten LGBTQ+ workers leave their jobs because the work environment is not accepting of LGBTQ+ persons. In Canada, a Pride at Work survey found that out of 814 persons surveyed, one in three people do not find their work safe and inclusive of LGBTQ+ employees. Additionally, 69% of companies in Canada do not have LGBTQ+ leadership at the executive level. Evidently, creating safe spaces needs to be a priority both inside and outside the workplace if inclusion and belonging are to be upheld as Canadian values.

While gender identity and sexual orientation were incorporated into the Canadian Human Rights Act in 2017, LGBTQI2S persons continue to experience violence at rates far higher than their heterosexual counterparts. According to Statistics Canada’s General Social Survey, 69 out of 1,000 straight Canadians report being victims of sexual assault, physical assault, or robbery. But the number increases to 142 for lesbian and gay Canadians and 267 for bisexual citizens.

As Canada’s leading and most progressive union, we have a responsibility to equip members, union stewards, and activists with the tools needed to recognize and combat heterosexism in the workplace. Accordingly, all UFCW Canada members can access the webCampus course entitled “Being Inclusive: LGBTQ,” which helps participants learn how to be more inclusive at work and in the community. The course is completely free of charge to UFCW members, family members, and allies, and is offered in partnership with Egale Canada.

This month, UFCW will be making the “Being Inclusive” course available to all youth attending the Egale Youth Services Drop-In Centre in Toronto, and our union will also be providing a Know Your Rights workshop to equip young LGBTQ+ people with valuable skills for entering the workforce.

On this National Coming Out Day, let us be mindful of the challenges that LGBTQI2S workers face, the courage that it takes to come out to family members, friends, and colleagues, and the awareness that we need to raise to create truly safe spaces for LGBTQ12S Canadians.