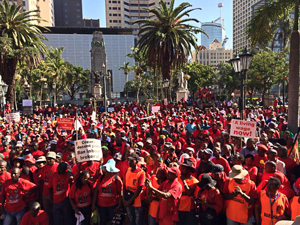 Toronto – July 12, 2014 – UFCW Canada congratulates the members of the Swaziland Agriculture and Plantation Workers Union (SAPWU) on the settlement they achieved following a three-week strike. More than 3,000 workers demonstrated immense courage throughout the duration of the strike, standing up to intimidation by the military and legal action by the company.

The employer – Ubombo Sugar – is a Swazi subsidiary of the South African sugar giant Illovo. While the multinational Associated British Foods has majority control of Illovo, Swaziland’s monarch King Mswati III owns 40% of Ubombo Sugar. Mswati has deregistered the country’s trade union centre and banned political parties. Although Ubombo Sugar is immensely profitable on the world sugar market, the company used threats, violence and intimidation in an attempt to crush the workers’ resolve. However, the workers prevailed, winning a 10% wage increase and achieving the union’s non-wage demands, including improved benefits for seasonal workers.

As Canada’s most progressive union, UFCW Canada joined the call by the International Union of Food, Farm and Hotel Workers – an international federation representing millions of workers – to support the SAPWU members in Swaziland. Messages demanding the employer negotiate a fair contract with the sugar workers were sent to the company and its international subsidiaries. In announcing the settlement, SAPWU general secretary Archie Sayed expressed gratitude to everyone around the world who took the time support the workers.