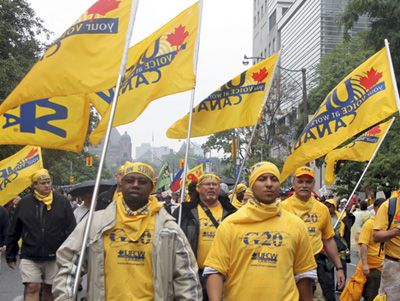 Thousands of UFCW Canada members, environmentalists, human rights advocates and other members of the progressive movement peacefully marched through the streets of downtown Toronto on June 26 to protest the pro-corporate, anti-family actions and policies of the G2O leaders, who were simultaneously meeting in the city mere blocks from the massive demonstration.

“We’re out here – and we’ve been out here all week – to be heard and to make sure the public knows that G20 leaders are trying to engineer a new world order that doesn’t work for working families and our communities,” says UFCW Canada National President Wayne Hanley who with UFCW Canada’s large, loud and brightly coloured group of activists marched several kilometers from the Ontario legislature along a parade route that was bordered on all sides by thousands of police, special forces and barricades.

“Instead of spending over $1.2 billion to bankroll the G8 and G20 summits, the federal government could have used a huge portion of that tax money for  job creation, child and elder care, and a number of other things that working families need right now,” says National President Hanley.

In the week prior to the People First! G8 & G20 Public Rally and March, UFCW Canada fully participated, hosted and engaged in a number of demonstrations and events that drew wide public attention and strengthened solidarity on a variety of issues facing workers and the future of Canada.

Full coverage of the union’s participation in the People’s Summit – the progressive movement’s response to the G20 meetings – is available at GEE20.ca, a special internet project launched by UFCW Canada just prior to the global trade and finance meetings. 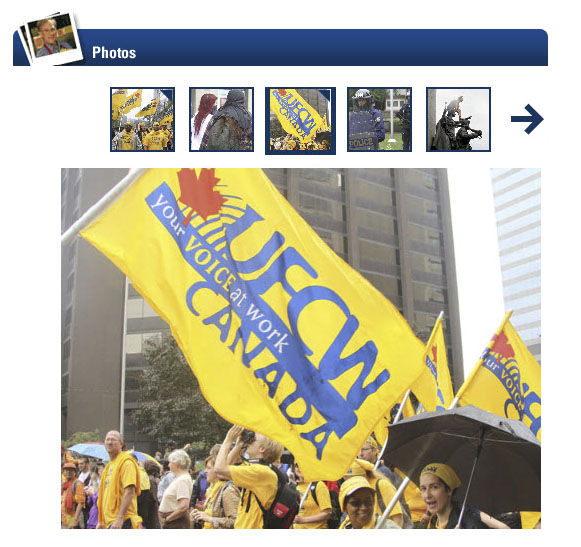