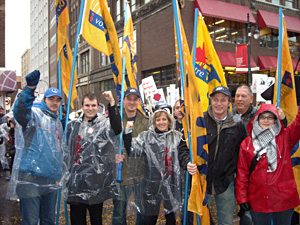 On November 11, 2011, TUAC Canada Local Union officers, members, and activists marched alongside 20,000 students in Montréal to oppose Quebec Premier Jean Charest's plan to raise annual university tuition fees by $325 each year, from now until 2016. The tuition fee increase of $1,625 over five years is unacceptable to students and Canadians who believe in equal access to higher education.

Across Québec, TUAC Canada is standing in solidarity with the campaign to oppose the unilateral tuition fee hikes. According to Louis Bolduc, Executive Assistant to National President Hanley, "the jump in annual tuition will have a detrimental impact on the ability of TUAC Canada members and all working families to afford post-secondary education for their children. It will also mean more debt for students, which will take their focus away from studying because they'll have to work longer hours at part-time jobs to pay off their loans."

A recent report by theQuébec Federation of University Students (FEUQ) shows that half of the province's students who are currently completing a bachelor degree are already working 16 hours per week outside of class, while living on roughly $12,000 a year.

"We hope that Jean Charest's Liberal government will first explore other options to the tuition hike, such as analysing the administration of the institutions ," says Brother Bolduc, who is also a vice-president of the Québec Federation of Labour. "Forcing students to pay more to fix the system will just make it more inaccessible."