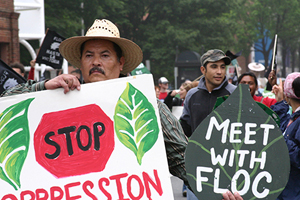 In a landmark breakthrough for farm worker rights and international solidarity, major tobacco companies have agreed to designate a committee made up of representatives of tobacco manufacturers, tobacco growers, and farm workers to discuss freedom of association and other basic rights for farm workers in the Midwestern and Southern United States.

The victory comes after a four year campaign for human rights led by the Farm Labor Organizing Committee, AFL-CIO (FLOC) that involved a number of leading labour and progressive groups throughout North America including UFCW Canada.

The breakthrough is five years in the making, starting in 2007 when FLOC was first requested a meeting with the major tobacco company Reynolds to discuss problems at the bottom of the tobacco supply chain including sub minimum wages, child labor, heat stroke, pesticide and nicotine poisoning, green tobacco sickness, lack of water and breaks during work, and fatalities. Reynolds refused to meet, claiming that because they did not employ farm workers directly, they had no responsibility to be a part of the solution to these problems.

But thanks to the power of international solidarity and the sustained pressure of progressive groups and individuals throughout continent, Reynolds and other major tobacco companies have reversed their position and recently called for the creation of the stakeholder committee to focus on a serious conversation about respecting labour rights in their supply chains.

“The campaigns in which UFCW Canada participated were a major propeller for this decision,” said FLOC organizer Beatriz Maya. “You made it happen. We want to extend our most sincere thank you to all of you. Thank you for your solidarity.”

“UFCW Canada is very proud to have contributed to something so groundbreaking for the international labour rights movements,” says UFCW Canada National President Wayne Hanley. “Farm workers in a number of countries around the world, including Canada, are some of the most precarious and exploited people in the global labour force, and we must maintain an international approach to employers that says ‘Labour Rights are Human Rights’ and we are fully united in securing those rights for all.”

Despite the breakthrough, FLOC is quick to remind supporters around the world that the campaign for farm worker rights in the United States is far from over. “This effort is not about meeting to just talk, this campaign will continue until Reynolds comes to an agreement with FLOC guaranteeing the right to freedom of association and the right to bargain collectively for all farm workers in their supply chain,” said FLOC Founder and President Baldemar Velasquez.

To find out more about FLOC and what you can do to help, visit www.floc.com