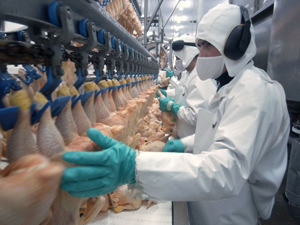 (Washington, D.C.) – After a 12 year legal struggle, more than 12,000 Tyson poultry workers in 41 plants in 12 states will receive their payments from the largest settlement against a major poultry company at $32 million.  Thanks to the tenacity and dedication of thousands of workers from across the country and the support of the United Food and Commercial Workers Union, workers involved in the suit will receive payments averaging $1,200 in lost wages.

The success of the Tyson’s settlement for poultry workers is just one in a series of actions where workers continue to fight and take a stand for workers’ rights in poultry and meatpacking plants around the country. Similar cases have been brought and resolved against Perdue and Pilgrim’s Pride plants as well. The UFCW continues to work to make sure that every meatpacking and poultry worker is paid honestly and fairly for the work they do. A suit that was filed in 1999 was the first action of its kind to force poultry companies to obey the nation’s basic wage and hour laws.

“This lawsuit and the new pay practices in the meatpacking and poultry industry are just one way union workers raise standards for every worker in their industry,” said Joe Hansen, UFCW International President. “While this settlement is long overdue, our efforts have ensured that thousands of workers have been paid correctly for years now.”

These payments will inject much-needed money into America’s rural economy and reward a hard-working and dedicated group of poultry workers.

The lawsuit charged Tyson with violations of the Fair Labor Standards Act and cheating their poultry plant employees out of wages by failing to pay workers for the time they spend putting on and taking off protective gear they wear to keep the food they process safe and for their own protection. The poultry company also violated the basic wage and hour laws by failing to provide workers with their required break time.

“Every American deserves to get paid for the work they do,” Hansen continued. “We’re changing the way meat and poultry industries do business by ensuring that workers are paid for all of their time on the job.”

Workers, the UFCW, and activists started to take collective action for workers’ rights to fair wages and treatment at the workplace in 1999. Between 1999 and 2001, they took their action on the road and spread the word of their mission through a bus tour and leafleting other Tyson workers. In that brief time, almost 4,000 workers signed up to join. The federal lawsuit developed following a U.S. Department of Labor survey that found over 60 percent of the nation’s poultry companies were in violation of basic wage and hour laws.

The collective case representing the workers from several plants from across the country went through several judges until a judge in November 2006 declared that the case under the different plants could not be presented as a singular case and dismissed it. The workers and their supporters continued their legal action despite the large setback and filed their cases on a plant-by-plant basis. More than 17,000 workers start signing up to join the suit under the new case conditions.

In September 2011, the workers sent a settlement agreement to the court, which the court later approved. After almost 12 years, workers receive notice in January 2012 that they will finally be receiving their settlement payments.

In order to qualify for the settlement, current workers must have signed up to be part of the lawsuit back in 2008 and former employees were required to send back the W-4 form included with the payment notice, so that tax withholdings could be properly calculated.