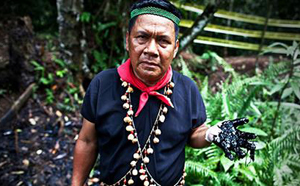 Toronto – November 5, 2014 – As Canada’s most progressive union, UFCW Canada is supporting the Chevron’s Dirty Hand Tour, a campaign demanding justice for thousands of indigenous people who have been poisoned, displaced, or killed by Chevron’s devastation of the environment around the world.

Chevron is the third-largest corporation in the United States, with annual revenues totaling more than the Gross Domestic Product of 138 individual nations. Between 1964 and 1990, a subsidiary of Chevron dumped approximately 18 billion gallons of toxic wastewater directly into the ecosystem of the Amazon rainforest in Ecuador. In what has been dubbed the "Chernobyl of the Amazon," pollution levels 30 times higher than the Exxon Valdez disaster in Alaska resulted in an explosion of miscarriages, birth defects, and cancer among Ecuadorans. At least seven aboriginal nations living in the Amazon were directly affected by the dumping, two of which have been virtually wiped out by the disaster.

In 2011, the Supreme Court of Ecuador ordered Chevron to pay $9.5 billion dollars to individuals and communities affected by Chevron's reckless actions. The company responded by selling off its assets in Ecuador in a cold-hearted attempt to avoid accountability. The plaintiffs then launched court cases in other countries where Chevron holds assets, including Canada, thereby taking the struggle for justice to the global level.

Chevron’s estimated assets in Canada total $15 billion. The Supreme Court of Canada has agreed to hear the plaintiffs’ case. And Canada is not immune to Chevron’s agenda of contaminating the environment and indigenous nations – the company has plans to build an illegal pipeline on lands in British Columbia that belong to aboriginal peoples.

UFCW Canada activists have therefore joined with the #AntiChevron campaign to facilitate workshops, teach-ins, and community actions across Ontario and Quebec. On October 30, the Chevron’s Dirty Hand Tour kicked off in Toronto, Brantford, and Ottawa. The goal of the tour is to build awareness and demand that Chevron compensate communities affected by the company’s destruction. You can sign the petition urging the Canadian government to stop Chevron from doing business in this country until it cleans up its act.