Richardson Milling lockout over with new contract in place 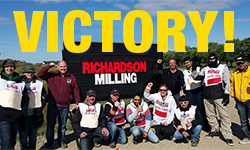 Martensville, Sask. – November 17, 2014 – The lockout of UFCW Local 1400 members at Richardson Milling is over as both sides recently ratified a new agreement.

The lockout lasted for over eight weeks.

The new contract which was overwhelmingly supported by the mill's workers, runs retroactively from 2013 and introduces a newly established grid system which sees annual wage increases for all of the plant's workers.

"I am very proud of the members of Richardson Milling," said Local 1400 President Norm Neault. "They chose to take a stand for fairness and equality proving employers and workers in Saskatchewan that working together in solidarity can make a difference."

Workers at Richardson Milling are pleased to be at work again.

Richardson Milling is the largest oat miller in North America and provides its products to partner food manufacturers such as Kraft, Kellogg, General Mills, Con Agra Foods, and Ralston Foods among others.

Congratulations to our members at Richardson Milling who have shown solidarity in their perseverance and who have shown what can be accomplished by sticking together.