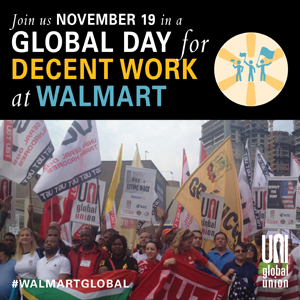 Toronto – November 17, 2014 – Around the world, Walmart workers and their supporters will be calling on the world’s largest employer to provide good jobs and better wages. November 19 is the Global Day for Decent Work at Walmart. As Canada’s union for Walmart workers, UFCW Canada will be joining with activists in more than 10 countries in this coordinated day of action.

The owners of Walmart – the Waltons – are the richest family on the planet. Their combined worth is more than $150 billion and it grows by more than $8 million per year. Despite this massive accumulation of wealth, Walmart still pays its workers low wages, offers few full-time jobs, and often retaliates against workers who stand up for their rights. Fed up with barely scraping by, Walmart workers are calling on the Waltons to immediately address the issues in their stores, warehouses and supply chain.

Walmart workers, along with members of the UNI Walmart Global Alliance including UFCW, will be taking action on November 19, in Canada, the United States, Mexico, Brazil, India and many other countries. The campaign’s demands are simple: living wages, employment security, and respect. Walmart workers at more than 2,000 stores in the United States have already signed a petition demanding a $15-an-hour minimum wage and full-time jobs for all employees. Show your support for Walmart workers and sign the petition HERE.

UFCW Canada is the only union to have successfully achieved a collective agreement for Walmart workers in Canada. As the leading voice for retail workers, the union has also won Supreme Court cases against Walmart. With your support, and more than a quarter-million members across the country, UFCW Canada will win respect and good jobs for Walmart workers.