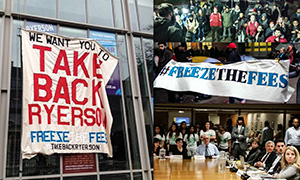 Toronto – December 6, 2014 – UFCW Canada stands in support of the Ryerson Students' Union's Freeze the Fees campaign, which has called on the Ryerson University administration to freeze tuition fees.

Students at Ryerson University in Toronto peacefully protested by camping out on campus as a response to the university administration's tuition fee increases and academic departmental budget cuts.

The Ryerson Students' Union, as well as the Continuing Education Students Association at Ryerson and volunteers with the Student Action Committee have collected over 5,000 signatures on a petition. The petition calls on the university to freeze tuition fees for domestic students, reduce international student tuition fees to be in line with domestic students, and calls on the provincial government to allocate more funding to post-secondary institution.

"We need to get the message across that fees are pushing education beyond the means of more and more families," says Derek Johnstone, UFCW Canada’s Ontario director.

Over the last decade, the university has imposed consistent increases in tuition, as well as cuts to academic departmental budgets. Students are finding it increasingly difficult to be able to afford the high cost of education. As a result, more students are taking on multiple minimum wage jobs, accessing services like on-campus food banks, and taking on multiple and private loans to afford education.

You can support the Ryerson Students' Union campaign by visiting them on Facebook: http://www.facebook.com/StudentActionAtRyerson, or tweet using  #FreezeTheFees.