By the Numbers: Rising food prices in Canada 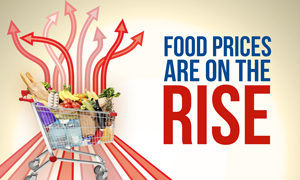 Toronto – February 12, 2015 – Canadians can expect to pay more for the price of food this year, largely due to the falling value of the Canadian loonie against the U.S. dollar. Over the past 7 months, the loonie has fallen 15 per cent relative to the U.S. dollar. That means higher grocery bills for Canadians, especially for fresh and processed foods from the USA. The drop in the loonie has been so rapid, it actually forced the University of Guelph Food Institute to recently post an amendment to its annual Food Price Report for 2015; forecasting even higher prices in 2015 than the report projected when it was originally released.

5.5-7.5%
The cost of vegetables is expected to increase anywhere between 5.5% and 7.5% over the year. Canadians will notice an increase in vegetable prices particularly in winter months.

3-5%
Originally forecasted to be between 1-3%, the price of fruits and nuts is now expected to move even higher due to a lower Canadian dollar.

>10%
Less than 10% of the average Canadian household budget is spent on food.

3-5%
The price of fish and seafood is expected to climb upwards of 3-5% in 2015. There have also been size reductions in packaging for items such as tuna. To manage food prices at restaurants, sizes of protein on the plate is expected to be much smaller than before for the same price. Pressures to stabilize prices for consumers come at the cost of quantities, and it is expected that packages and portions will continue to shrink on the horizon.

$40,000,000,000
Canada is likely to import over $40 billion worth of food product in 2015. Among the imports are fruits, nuts, vegetables, coffee, fish, chocolate and processed foods. Weaker domestic currency could see rises to prices of these products.

18%
The import of cereals, such as wheat, oats and corn has increased by more than 18% in 2014. Due to the closure of manufacturing plants in recent years, Canada relies more heavily on processed food imports in response to consumer demand. Prices could also rise for many products which are now imported, but were not before.