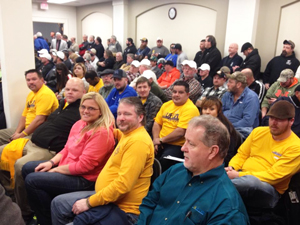 Frankfort, Kentucky – February 25, 2015 – UFCW members in the U.S. state of Kentucky are rejoicing after a Republican-backed Work For Less law was defeated by a Kentucky House committee earlier this month.

Members of the House Labor and Industry Committee recently voted down Senate Bill 1 in front of a standing room only crowd filled with UFCW members proudly dressed in gold. A great deal of work from UFCW members in Kentucky went into this important victory.

For weeks, UFCW members traveled to Frankfort – the State Capitol of Kentucky – to speak with their legislators and educate them about the pain that Work For Less legislation would bring to working families in Kentucky.

Just before the measure failed, Caitlin Lally from UFCW Local 227 gave an impactful testimony to the committee. "There are hundreds of thousands of workers all across Kentucky (who are) looking to this committee to do the right thing," said Lally. "Let’s pursue an agenda to make Kentucky stronger. Let’s continue to build a state where businesses grow, workers succeed, and families thrive. Let’s resist the influence of outsiders and come together in the proudest traditions of our state. Let’s defeat (Work For Less)."

The defeat of Work For Less in Kentucky shows that workers who stick together – both inside their workplace and in the political arena – can shape a better future for themselves and their families.