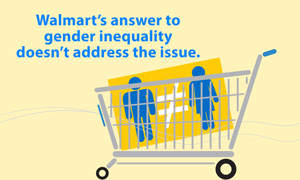 Toronto – March 23, 2015 – Walmart is responding to allegations of gender pay inequality by introducing a new Women Owned label to be applied to products from women-owned companies, in a marketing ploy that does nothing to address issues faced by female workers at the retail giant.

Cynthia Murray, a U.S. Walmart worker who is also a small shareholder in the company, is urging the retailer to disclose wage information by gender as well as the average hours worked by its male and female workers in an effort to ensure pay equity at the company. Murray has submitted a resolution to be taken up at Walmart's annual general meeting in June that the company disclose its gender pay figures.

Walmart, which has faced allegations of discrimination against women in promotions, pay and job duties, currently does not disclose gender pay information.

In response to these allegations Walmart has launched its Women Owned campaign to highlight products in their store made by women-owned companies. Walmart also announced, as part of the campaign, that it will turn to third-party validation to verify that these companies are at least 51% owned, operated or controlled by a woman or a group of women. Meanwhile, use of third-party verification is something the company has refused to confirm building safety of its clothing suppliers in Bangladesh.

In 2011, 1.5 million women in the U.S. sued Walmart for multiple forms of discrimination including wage discrimination. In 2010, Walmart settled a lawsuit brought by the Equal Employment Opportunity Commission, a U.S. agency that litigates on behalf of workers against employers, paying $11.7 million in back wages and compensation damages to women in Kentucky who were denied jobs because of their gender.