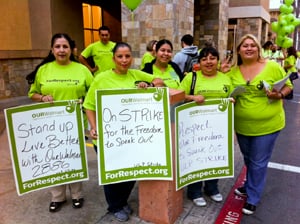 For more than a year now, thousands of Walmart associates who formed OUR Walmart, a worker-led organization based in the United States, have been standing up to make change in their company. Instead of listening and working with OUR Walmart members, Walmart has instead retaliated against workers and tried to silence them.

On Thursday, October 4, these workers responded to Walmart’s refusal to treat its employees with fairness by going on strike at several Los Angeles-area stores. The goal of the strike is to protest Walmart’s attempts to silence and retaliate against associates who speak out.

“As the voice for Walmart workers in Canada, we are very proud to send our full solidarity and support to the brave Walmart workers in Los Angeles, who are making an important stand for change at one of the world’s largest employers,” says UFCW Canada National President Wayne Hanley. “To demonstrate our support we are calling on more than a quarter of a million UFCW Canada members – along with their friends and families – to join the fight for fairness at Walmart by sending a support message to the LA Walmart workers, and by signing a petition that pressures the company to do the right thing.”

To sign the petition and to send a message of support, go to: http://corporateactionnetwork.org/petitions/stand-with-walmart-workers-fighting-for-their-rights

“The rights we hold dear were won by groups of people who had the courage to stand up for what's right,” adds Hanley. “As people who care about the future of work in North America and around the world, it is our duty to support them in any way we can.”

The United Food and Commercial Workers Union (UFCW Canada) is Canada's largest private-sector union. With more than a quarter of a million members from coast to coast, UFCW Canada is a leading force for social justice and the strongest voice for fairness in Canada's retail industry.