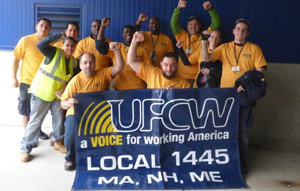 The new bargaining unit consists of workers in the Goods Flow department, IKEA's overnight replenishment team. Workers joined the union to achieve better wages, benefits, and working conditions, and to have a strong voice in the workplace.

Workers are seeking union recognition in a National Labour Relations Board (NLRB) process that allows an employer to voluntarily recognize a union when workers demonstrate majority support. An overwhelming majority of Goods Flow workers signed a petition to join the union.

The Boston-area IKEA store has been the subject of a NLRB complaint that alleges the company violated U.S. laws by unlawfully infringing on the right of workers to engage in protected union activity.

"I love working at IKEA, and I want to make a career here," said IKEA worker Chris DeAngelo. "A union is the best way to work together to live our values and build an even better IKEA. We've gone through a lot at our store, but this is a chance to turn over a new leaf and reset the relationship between workers and management. If IKEA chooses to recognize our union today, it will show other workers that IKEA respects our right to join a union without fear of retaliation or harassment."