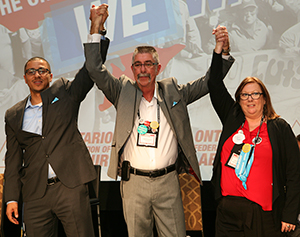 The FedForward team had campaigned on a platform to rebuild and revitalize the OFL through greater grassroots and labour council engagement; enhancing the OFL’s political action and lobby capacity; providing a central role to help workers win their job action battles; and making equity a central priority for all OFL campaigns and initiatives.

“We want to congratulate all the members of the FedForward team. Their vision, experience, and commitment to workers rights and the union movement are good news for the OFL, its affiliates, and all workers in Ontario,” says UFCW Canada National President Paul Meinema. “And we are especially proud of Brother Ahmad Gaied, who we know will make a tremendous contribution in his new role as OFL Executive Vice-President, just as he has for many years as a UFCW Canada Local 1000A activist.”

The convention runs until November 27. A full round-up of the 13th Biennial OFL Convention will appear in the Monday, November 30th edition of Directions.