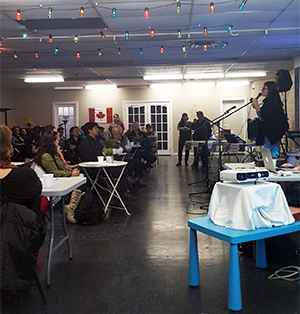 Toronto – March 3, 2018 – UFCW Canada recently partnered with Legal Aid Ontario to conduct an information session for workers and community groups on the province’s recent labour law reforms, and to educate workers on how they can join a union.

The session attracted dozens of workers from the Jane and Wilson community – many of whom are non-unionized and precariously employed – and enabled attendees to ask questions about Bill 148. As well, UFCW Canada activists Nohora Castaneda, Nathalie Vengal, and Laura Pena delivered a presentation detailing how workers can join a union and answered questions from the audience regarding workers’ rights under the law.

The information session was part of a series of “El Cafecito” events organized by Legal Aid Ontario, the Centre for Spanish Speaking Peoples, and interested community partners like UFCW Canada.

“As Canada’s leading union, UFCW believes it is essential to educate workers about their rights under the law and in the workplace,” says Paul Meinema, the National President of UFCW Canada. “Our union looks forward to participating in more El Cafecito events in the future,” he adds.