Hospitality workers at Best Western join the union – UFCW 1006A 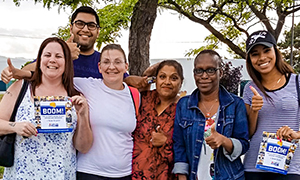 The new UFCW 1006A members work in a variety of key roles, including housekeeping, breakfast staff, front desk, laundry and night auditors.

“Our newest members at the Best Western Oshawa have shown when workers come together with solidarity, courage and determination, they have the power to transform their lives,” says Local 1006A President Wayne Hanley in welcoming the new members.

Lesley Prince, UFCW 1006A coordinator of organizing, said the workers joined the union to have a stronger voice at work.

“These workers are incredibly supportive of each other. They are looking forward to the next step of negotiating their first union contract,” says Sister Prince.

In addition to the Best Western, UFCW Canada represents hotel workers at 120 different locations across six provinces, at some of the country’s most popular chains, including Cambridge Suites, Comfort Inn, Holiday Inn, Super 8, Radisson, Fairmont, Westin, and others.

To find out more about UFCW Canada’s growing presence in the hospitality industry and other key sectors of the economy, check out our latest UFCW Canada Annual Report.

For the full story on the Best Western workers joining the union, and the outstanding work of Local 1006A, check out ufcw1006a.ca.