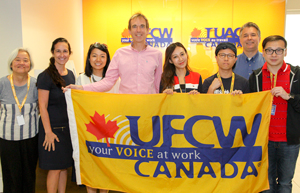 Toronto – July 17, 2019 – UFCW Canada activists recently met with representatives from the Hong Kong Confederation of Trade Unions (HKCTU) to explore common challenges among workers in Canada and China and to discuss our union’s efforts to organize workers in the gig economy.

At the meeting, Fung Po-yan, Chairperson of the Cabin Attendants Union of Hong Kong; Ngan Man-him, Deputy Secretary General of the Association of Government, Technical, and Survey Officers; and Tsang Chiu-man, Organizing Secretary of the HKCTU, joined Winnie Ng of the Canadian Labour Congress and Jennifer Huang from the Toronto & York Region Labour Council to speak with UFCW organizers about issues impacting workers across borders.

Some of the topics covered included the rise in precarious employment among workers employed by Uber, Lyft, Foodora, and other platform-based companies, and the push from so-called “gig economy” workers to enforce their rights by joining a union. For example, in a ground-breaking organizing campaign, hundreds of Uber Black drivers in Toronto recently joined UFCW Canada to gain fair pay, benefits, and respect from their employer.

Founded in 1990, the HKCTU is an independent trade union federation representing over 200,000 members in China’s service, transportation, and public sectors, as well as other industries. A sister organization of the CLC, the federation is affiliated with the International Trade Union Confederation (ITUC) and – along with UFCW Canada – is also a member of the International Union of Food, Agricultural, Hotel, Restaurant, Catering, Tobacco and Allied Workers' Associations (IUF).

To learn more about the HKCTU, visit their website.